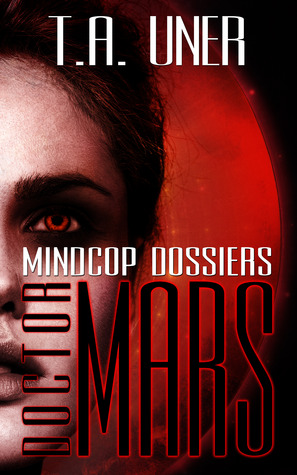 In the early 22nd century, Mars has been fully colonized and terraformed by humans. On this new Earth colony the members of the MCPF (Mars Colonial Police Force) keep the peace. Liberty Rise is a gifted mutant with the power to manipulate time using her “mind-shifting” technique. As a member of the Mindcop division, she must use her skill to solve paranormal crimes.

When a recluse scientist named Dr. Andreas Hitzig threatens the safety of Mars, Liberty and the MCPF must intervene.

I was given a digital copy of this book free from the author, T.A. Uner in exchange for an honest review.

Well, well, well, that was awesome! Doctor Mars is the introductory novella of the science-fiction series Mindcop Dossiers. To be honest, I really don’t know what to expect from this book, but I already had an idea that it’s going to be really awesome because of its promising blurb, so yeah, it didn’t disappoint me.

First, I love the concept of this book. It’s straight to the point and very unique. The thought about Mutants, messing up with a human’s genes to create something dangerously out of the ordinary for destruction, and living in the most intriguing planet in the Universe– Mars, is quite an impressive attempt of the author to make up such a great series.

The characters are also likeable especially Liberty who appears to be really tough, intelligent, and a gifted mind-shifter who can travel back to the earlier time with just one touch to any organic objects she’s investigating. Well, that is such a unique trait for a character.

Slow Fly is a bit of a mystery. I don’t know if he’s an antagonist or protagonist, I still have to decide. But I think his character is interesting enough.

The ending is also quite spectacular. It left me hanging in the open! What really happened to Calvin??? So many questions kept bugging me. Anyway, I guess I just have to find out soon. 🙂 As a whole, Doctor Mars is one promising and great installment of the series!

My Rating for this Book: Awesome 5 Stars!