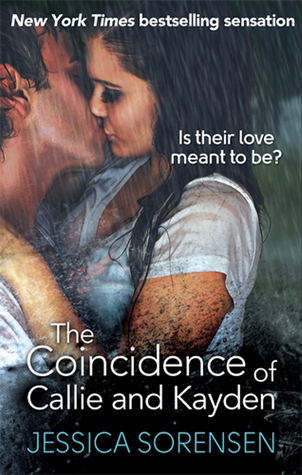 From the bestselling author of The Secret of Ella and Micha comes a mesmerizing novel of fate, friendship, and the healing power of love . . .

For Kayden, suffering in silence was the only way to survive. If he was lucky, he could keep his head down, do as he was told, and make it through the day. But one night it seemed like his luck-and his life-might finally end . . . until an angel named Callie appeared just in time to rescue him.

Callie has never believed in luck. Not since her twelfth birthday when everything was taken from her. After the worst was over, she locked up her feelings and vowed never to tell anyone what happened. Now, six years later, she continues to struggle with the painful secret that threatens to consume her.

When fate lands Kayden and Callie at the same college, Kayden is determined to get to know the beautiful girl who changed his destiny. Quiet and reserved, Callie still fears letting anyone else into her world. But Kayden is certain that Callie has come back into his life for a reason. And the more he tries to be a part of her life, the more he realizes that, this time, it’s Callie who needs to be saved . . .

Callie saved me that night from a fight that would have probably left me dead, but she also saved me from myself. Before her, I was dying inside; there was nothing in my heart, but an empty hole.

This is without a doubt, one of the best New Adult – Contemporary books I’ve had so far. I love everything in The Coincidence of Callie and Kayden! It’s one of those books that have everything you want in a contemporary read that will leave you feeling awed. It’s just *sigh* perfect!

If you want to read something that has to do with dark past and secrets with a bit of heavy drama and a sizzling romance, then this book is for you. I love how Jessica Sorensen evoked such deep emotions in me when I least expected it. The characters– Kayden and Callie are one of the amazing characters I’ve met. The chemistry is seriously visible. And I love the fact that each time they interact, you can really feel the sexual tension between them.

And let me tell you that the very first moment you’ll meet the characters, you’ll instantly feel the connection. They’re two troubled, f*cked up characters with emotional wounds that will really tug your heart. And oh, the romance is good. Every freaking kissing and make-out details of Callie and Kayden is emotional and moving you will basically find yourself hanging on to every word the author writes.

After reading the book, I had a very huge desire to find the second installment and grab another bite ‘coz ugh, it feels not enough. The ending is a total cliffhanger (though I really don’t mind). 🙂

As a whole, The Coincidence of Callie and Kayden is totally a must-read.

“In the existence of our lives, there is a single coincidence that brings us together and for a moment, our hearts beat as one.”