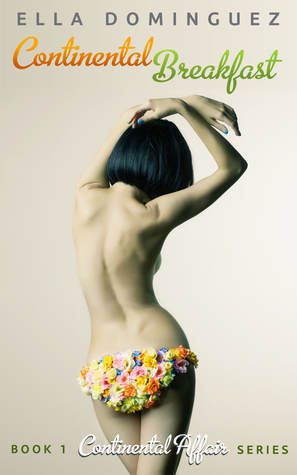 Bella Darcy is personal assistant, muse and plaything to wealthy businessman Mr. Pettifor. Their 9-5 relationship is unconventional, but mutually satisfying.

Mr. Pettifor is alpha male personified – demanding, stern, insatiable, emotionally closed-off and seemingly indifferent to anything that doesn’t involve six zeros behind it.

Bella had never wanted more until the day she heard passionate cries that didn’t belong to her, coming from his office. Deeply hurt and realizing that she cannot be with a man who can so blatantly be with another woman while she is mere feet away, Bella turns in her letter of resignation, throwing Mr. Pettifor into a tailspin. Everything he’s worked so hard for now seems insignificant and the woman whom he trained to be everything he wanted, has now decided to move on, leaving him reeling.

So here’s what I thought about Continental Breakfast. It’s pretty sexy and entertaining, and it kinda gave me a break from all the heavy reads I’ve indulged lately.

It’s a story about Bella Darcy, a beautiful and sexy assistant of a rich, billionaire CEO Mr. Xander Pettifor. Together they have a relationship– but this relationship is not a typical romantic one. It’s purely sexual. The BDSM type. No feelings involved except lust. All their sexual innuendos usually happen at the office, mostly in the mornings where the boss will call her around for a continental breakfast . (If you know what I mean);). Things suddenly changed when Bella thought she was falling in love with her boss. She even realized that she’s jealous when Mr. Pettifor’s ex came around. And there, the conflict began.

This novella is well-written and I can’t see any reason not to like the author’s writing style. But then, it fell short and I thought that a lot of qualities that should’ve made this book worthy for a 5 star-rating are amiss. The author was not able to accomplish a strong plot. The characters were also a bit shallow, especially Mr. Pettifor.

He was described as a good-looking man but all I could picture out was a man who’s not so attractive even though he’s a billionaire and with a brusque personality. I also can’t pull out any emotion from him. There was just… nothing! Nothing I could grasp. A POV of him would have helped but well…

I also can’t feel the love and romance between them. There were no feels. No feels at all. This novella would’ve been great if those qualities were incorporated here.

The author was good with words, though. And I’m sure she can do a lot better than this in the future. 🙂