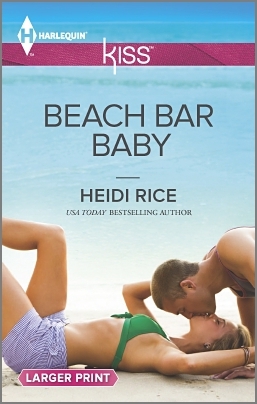 Beach…
After some bad news, Ella jets off to sunny Bermuda for a bit of solo R&R…

Bar…
By day six, surrounded by honeymooners and smug-marrieds, she has to admit the solo bit is getting a teeny bit boring! Why say no to a casual date at the bar with ripped, tanned and enigmatic Cooper Delaney?

BABY!
It’s really not Coop’s style to flirt with tourists, let alone hook up with one again. But he can’t get the sweet London girl out of his head.A business trip to Europe is the perfect chance to see her. Only he finds Ella curvier, prettier…and keeping a secret he was so not expecting…!

This book was frustrating. I expected a lot since it has a very promising start but then things have gotten worse all throughout the book.

The book starts with Ella who went to Bermuda for a summer vacation. There, he met the hot, gorgeous, and rich Cooper Dellany. They instantly had that chemistry which led to flirtations and well, sex. It was supposed to be just a summer fling, but when Ella returned to London, she found out that she’s pregnant. When Cooper went to London to see her again and found out that he’s about to become a dad, their connection continued and so on…

The book has a nice concept. I love summer themed books with fluff but this book gave me a real hard time. The writing style was okay but it wasn’t smooth compared to other contemporary books. The plot progression was also slow and I felt like there was nothing going on throughout the first half.

And my biggest concern?

I like Ella because she seems like a nice person but she’s weak as a character. I hate it when the heroine is too crazy and too patient over the guy just because she thinks he’s too perfect and good in bed. Cooper Dellany is also a very annoying man. Such an immature guy. The moment when he discovered that Ella was pregnant and the moment he freaked out was already my cue to generally dislike the book. And the moment Ella discovered that he doesn’t want to show her to his friends as the mother of his baby… WHAT A DOUCHEBAG!

I also dislike how sex became a common scene in this book. I mean, intimate scenes are spices to romance books but I think they’re already too exaggerating here.

NO, this book is a big mistake.