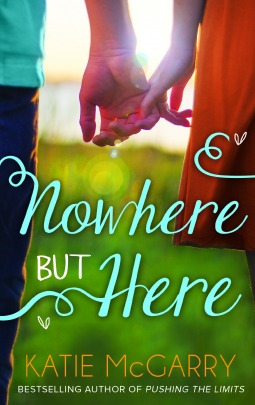 An unforgettable new series from acclaimed author Katie McGarry about taking risks, opening your heart and ending up in a place you never imagined possible.

Seventeen-year-old Emily likes her life the way it is: doting parents, good friends, good school in a safe neighborhood. Sure, she’s curious about her biological father—the one who chose life in a motorcycle club, the Reign of Terror, over being a parent—but that doesn’t mean she wants to be a part of his world. But when a reluctant visit turns to an extended summer vacation among relatives she never knew she had, one thing becomes clear: nothing is what it seems. Not the club, not her secret-keeping father and not Oz, a guy with suck-me-in blue eyes who can help her understand them both.

Oz wants one thing: to join the Reign of Terror. They’re the good guys. They protect people. They’re…family. And while Emily—the gorgeous and sheltered daughter of the club’s most respected member—is in town, he’s gonna prove it to her. So when her father asks him to keep her safe from a rival club with a score to settle, Oz knows it’s his shot at his dream. What he doesn’t count on is that Emily just might turn that dream upside down.

No one wants them to be together. But sometimes the right person is the one you least expect, and the road you fear the most is the one that leads you home.

“Isn’t it always the things that you can’t see that hurt you?”

It took me two weeks to finish this book. It was a struggle. This book offered a lot of potentials but unfortunately it lacked on so many levels.

The plot was too weak and the pacing was too slow. I had very high expectations for this book because I enjoyed Pushing the Limits a lot that I was really certain I will enjoy this, too.

Nowhere But Here begins when Emily went to Snowflake and discovered that there are secrets that were being kept by her biological father Eli who is a member of a motorcycle club called Reign of Terror. While in Snowflake, her whole life shifted when she met her relatives and the people inside the Reign of Terror, including the brooding biker Oz who became her instant bodyguard. She became aware of how different her life has been while growing up with her mom and her step-dad in Florida compared to the way things were at Snowflake.

This book was really promising, but then, as I read more and more I became really exhausted with the way the author seemed to make everything lengthy. Too many secrets. Too little revelations in every chapter. I grew really impatient. Worse, I discovered that the major secret everyone was hiding from Emily just turned to be light. It didn’t even get any reaction from me.

When it came to the characters, I admit I didn’t like both MCs during the first parts of the book. Emily was a brat. She was also judgmental, whiny, and a bit sarcastic at times. And Oz– he had an attitude. He was a dick to Emily and he complained a lot. Glad their characters improved in the middle up to the last parts of the book.

All in all, this book was not a great experience for me. Although it has a melodramatic and meaningful ending, still, I decided it was a little too late for that.

4 thoughts on “Review: Nowhere But Here by Katie McGarry”