Celaena Sardothien is Adarlan’s most feared assassin. As part of the Assassin’s Guild, her allegiance is to her master, Arobynn Hamel, yet Celaena listens to no one and trusts only her fellow killer-for-hire, Sam. In these action-packed novellas – together in one edition for the first time – Celaena embarks on five daring missions. They take her from remote islands to hostile deserts, where she fights to liberate slaves and seeks to avenge the tyrannous. But she is acting against Arobynn’s orders and could suffer an unimaginable punishment for such treachery. Will Celaena ever be truly free? Explore the dark underworld of this kick-ass heroine to find out. 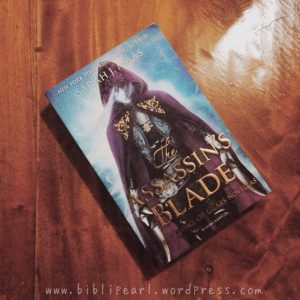 She was fire, she was darkness, she was dust and blood and shadow.

Absolutely fantastic and breathtaking! It’s hard not to love everything in The Assassin’s Blade. Even if it offered lots of achingly horrible events because of what happened to Celaena and how the book concluded, still, you could not deny the powerful and captivating effect that only Sarah J. Maas can convey.

The Assassin’s Blade is a series of prequel novellas including The Assassin and the Pirate Lord. etc etc… It basically entail the story of Celaena before she entered the glass castle and became the King’s champion.

Words are not enough to express how devastated I was after reading this book. Everything was perfectly written. I totally became an emotional wreck after reading it and worse, I found myself depressed and I don’t know if it’s good or not. All I know is that the book surprisingly gave me a hangover.

(I’ve also reviewed all the five novellas separately. Check them out here:

The Assassin and the Pirate Lord

The Assassin and the Healer

The Assassin and the Desert

The Assassin and the Underworld

The Assassin and the Empire