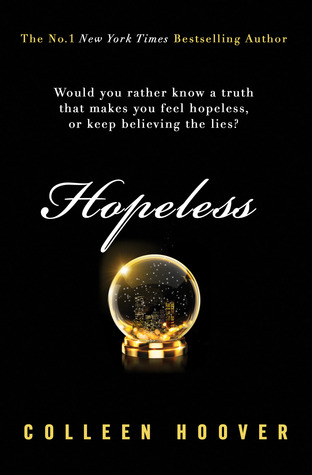 Sky Davis is starting sixth form having always been home-schooled, and wants to keep a low profile. But then she runs into Dean Holder – messy brown hair, smouldering blue eyes, and a temper straight out of Fight Club, someone who Sky is determined to avoid.

There is something about Holder that sparks memories of Sky’s troubled past, those which she would rather stay buried. Little does she know that the mysterious Dean Holder is harbouring secrets of his own . . .

When the truth unravels, Sky must piece her life back together and learn to trust again. Only by facing the revelations together can the two of them begin to heal their emotional scars and find a way to live without boundaries.

Another gut-puncher novel written by the one and only Colleen Hoover.

This was a very difficult book to rate for me. I enjoyed Colleen Hoover’s books– mainly Confess which until these days, remains my favorite. After reading Hopeless, I was torn whether I should rate it 3 or 4 stars. In the end though, I chose the former because I have more issues with this book than I’ve ever thought.

But first, let me give you the good traits about this book. I found this book outstanding because:

* Colleen Hoover writes beautifully. She always has a way with words that will leave you feeling awed. And just when you think it can’t get anymore emotional and heartbreaking, her writing goes and outdoes itself.

* The ending is heartbreakingly spectacular. So much that it can either make you smile or cry or both, like Confess’ ending. And only Colleen Hoover can make such a brilliant conclusion like that.

However, this book, for me, has some flaws which include:

*The slow pacing. Almost half of the book, in my opinion, was a waste since nothing really happened. It picked up during the second half when finally, some revelation came and that was the time when I felt so relieved and was able to breathe because… the book was really slow-paced. It dragged on and on and on.

*The predictable plot. At some point, I felt a bit frustrated because I already had an idea what’s about to come. I already visualized what happened to Sky because the idea was instantly introduced during her earlier flashback nightmare. And because of this, I found the book quite lacking when it comes to the plot twist. There were actually lots of twists in this book. Unfortunately, I already saw them coming.

*The romance seemed off. Maybe it’s just me or something, but I could not find myself fully invested with the characters’ romantic involvement. It was a little too instant. I couldn’t even understand why their relationship progressed into a whole new level after their first meeting. There was instant attraction and the way they immediately connected was kind of unbelievable.

It’s my first time rating CoHo’s books 3 stars and it seriously breaks my heart. I badly wanted to rate it at least 4 but I’ve got issues with this book that I can’t overlook. But despite these issues, I can assure that this one is a beautiful novel. CoHo’s way of writing is gripping and extraordinary. No surprise there.

Overall, I would describe Hopeless as one heavy, intense, and emotionally-driven book with an extraordinary level of angst. It’s a bit painful to read but it’s remarkable in a way because it tackles sensitive subject matters that actually happen in a real, non-fictional world. This book may not be my personal favorite among CoHo’s books, but I enjoyed the emotional aspect of it.