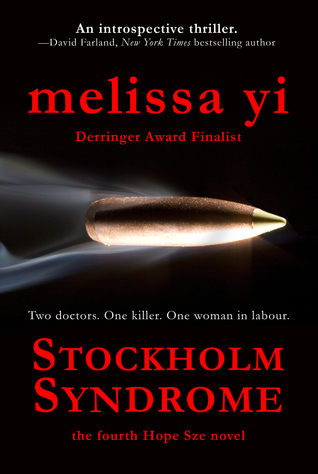 Two doctors. One killer. One woman in labour.

A killer infiltrates the obstetrics ward of a Montreal hospital just before Christmas, taking one pregnant woman and one resident doctor hostage at gunpoint.

Dr. Hope Sze struggles to deliver her patient’s baby with blood on the floor and death in the air.

And when Dr. Tucker tries to rescue their tiny crew, only to end up hostage material alongside them, Hope’s heart just might break, even before the kidnapper drills a bullet through her skull.

Whoa, what a roller coaster of a story!

I wasn’t able to read the previous books of this series but because it can be read as a standalone, it was still worth it. The story starts when Dr. Hope Sze, together with Dr. John Tucker, encounter a mad kidnapper who is looking for the mother of his child at the hospital. When the two of them ended up being hostages, that’s the time when action take place.

I loved the fast pacing of this book and the overall thrill that came along with it. It was such a page-turner. In fact, every page offered something that let me feel the adrenaline rush and the anticipation on how the characters are going to solve the dilemma and make it through the day without getting themselves harmed.

I rarely read psychological-action books like this, specifically books that have something to do with violence, but I rather find this book completely immersing and entertaining. Perhaps it’s mainly because of the witty heroine. Hope’s POV is hilarious and her character is admirable because she’s strong-willed and calm despite the chaos that was happening around her. Also, there’s a bit of romance in here. I seriously ship Dr. Tucker and Hope! They’re a great team together.

The medical stuffs mentioned in this book were also spectacular. The author is sure to be very knowledgeable in this field. As a whole, the entirety of this book is good. If you want some psychological thriller reads with some action going on, then you should pick this book up!

(A free copy was sent by the author in exchange for an honest review.)