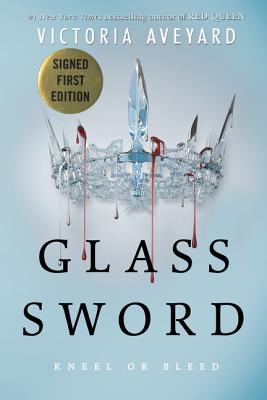 Mare Barrow’s blood is red—the color of common folk—but her Silver ability, the power to control lightning, has turned her into a weapon that the royal court tries to control.

The crown calls her an impossibility, a fake, but as she makes her escape from Maven, the prince—the friend—who betrayed her, Mare uncovers something startling: she is not the only one of her kind.

Pursued by Maven, now a vindictive king, Mare sets out to find and recruit other Red-and-Silver fighters to join in the struggle against her oppressors.

But Mare finds herself on a deadly path, at risk of becoming exactly the kind of monster she is trying to defeat.

Will she shatter under the weight of the lives that are the cost of rebellion? Or have treachery and betrayal hardened her forever?

The electrifying next installment in the Red Queen series escalates the struggle between the growing rebel army and the blood-segregated world they’ve always known—and pits Mare against the darkness of her own heart.

Gripping, intense, and an achingly beautiful comeback. This sequel to the Red Queen is Victoria Aveyard at her very best!

Sequels have always been very crucial in a series because they can either be a success, a failure, or in between. Thankfully, this sequel fell to the success side.

Red Queen ended up with a promise. Glass Sword started off by fulfilling that promise.

It’s actually hard not to love this book because first and foremost, everything started with a BANG! Lots of actions were already happening even at the very first pages that I found myself gripping the edge of my seat.

I was particularly amazed by how Victoria Aveyard weaved the plotline of this book with so much thrill and adventure. The searching for new bloods and the painful, action-packed experiences Mare and the gang experienced as they journeyed from places to places. The introduction of new characters that are so interesting and with unique traits and abilities. So exceptional!

Yes, there were parts that are dragging, but who cares? They actually gave so much time to take it all in and anticipate what’s about to come. Was I surprised? Hell, yes! There were so many shocking scenes and revelations here. Even heartbreaking ones that made me cry.

“I stare at the polished metal, examining my reflection. The girl I see is both familiar and foreign, Mare, Mareena, the lightning girl, the Red queen, and no one at all. She does not look afraid. She looks carved of stone, with severer features, hair braided tight to her head, and a tangle of scars on her neck. She is not seventeen, but ageless, Silver but not, Red but not, human–but not. A banner of the Scarlet Guard, a face on a wanted poster, a prince’s downfall, a thief… a killer. A doll who can take any form but her own.”

Mare’s character development, I admit, was kind of an on-and-off here. Sometimes she was so weak and hopeless but most of the time her strength was the one that made sense to everything. On the other hand, Cal— Holy freakin’ Cal! This guy– *sigh This brooding prince, ONCE AGAIN, swept me off my feet! His character development in this book amazed me to no end! Seriously, I love him even better here! He was indeed born a leader as the way he acted always had an air of command. And when he brought the “That’s my girl” line to Mare…. *squeals! Who wouldn’t swoon over?

The romantic parts in this book was my most favorite, of course. I was so happy that there was a bit of a romantic development here between Mare and Cal! MY SHIP! It was certainly sailing in all its glory!!!

The ending, however, made me flinch and cry and feel a bit of frustrated. WHAT ON EARTH JUST HAPPENED? I was screaming at the top of my lungs because once again, CLIFFHANGER! And we all have to wait another year before the third book comes out!

All in all, Glass Sword is a beautiful, satisfying, made-me-swoon-and-cry sequel. Everything that happened here was remarkable and right in target.