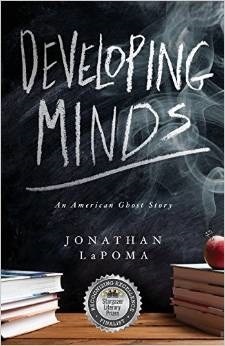 Developing Minds: An American Ghost Story follows a group of recent college graduates who struggle with feelings of alienation and their addictions as they try to survive a year of teaching at two dysfunctional Miami public schools.

A poetic and insightful coming-of-age novel, Developing Minds is centered on 24-year-old Luke Entelechy, an aspiring writer who sees his creative output suffer when he begins teaching at one of Miami’s most challenging middle schools. As the year progresses, however, Luke begins to relate to the neglect and abuse his students suffer, and is faced with a “haunting” decision: continue to let his dark past destroy him, or rise above the struggle to realize his potential as an artist and a “real” human being.

Equal parts disturbing and humorous, Developing Minds offers a brutally honest look at the American public school system and the extreme measures many teachers take to cope with working in it.

At first I really thought this book has something to do with ghosts and scary stuffs, but there weren’t any. The attached “ghost story” in the title is purely metaphor. Developing Minds: An American Ghost Story is actually a coming-of-age contemporary story that presents college graduate Luke Entelechy who came to Miami with his friend Billy to dive into the world of teaching. Despite his reluctance to the profession, and despite the fact that he originally wanted to be a writer, he accepted the challenge of education because that’s the only way to compensate his financial needs.

Applying for a teaching job in Miami was a tough one because Luke wasn’t able to land a job so easily and he even ended up being hired by an admin from an F-rated school. What’s even tougher was the fact that kids with all types of personalities were attending there.

This book basically depicts the reality of educational and school system, its strengths and its flaws and most of all, the struggle the educators are facing behind the black boards and classroom doors. Being a teacher is indeed a tough job, more so when you’re assigned to a school where there’s an unhealthy environment and where most kids don’t learn the art of respect. Through this book I was able to visualize the educational system in Miami and became aware that not all schools are really outstanding and perfect.

Racism, drugs, and sex are also few of the subjects matters that were being explored here and for that, I admired the author because these things scream reality.

Luke’s personal battle against his decisions were also significantly defined here. In my opinion, he did some good decisions but there were also bad ones, including the decision he made in the end. For me, it was a bit of a cowardly move because there wasn’t any resolve that I found. What happened to the kids he taught in Miami? Was he able to make a difference in their lives? That was what I’ve been longing to see but sad to say, it didn’t happen.

“School was claiming my absolute best. Every day was a struggle to stop the panic from taking over. Every day was a fight to stay at the head of that classroom without the kids realizing the utter terror I felt facing them day in and day out.”

As for the author’s writing, I loved it. Jonathan LaPoma has a spot-on writing style and he tags along humor with it. I was laughing my ass out at some point because Luke and Billy’s interactions were really witty and hilarious! If you are a teacher or someone that is related to education or even a student, I know you will very much appreciate the message behind the story of this book. I, myself, felt awed while reading this.

(A copy of this book was sent by the author and the publisher in exchange for an honest review.)