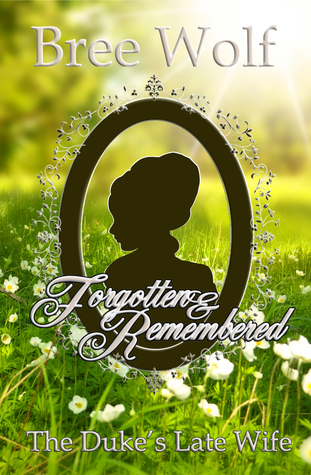 One night, they find themselves under some mistletoe.
Now, he owes her a kiss. And she is determined to claim it.

HIS HEART TORN in two, Graham Astor, Duke of Kensington, mourns his wife. As he distances himself from everything that reminds him of happier days lost forever, he comes to realize that there is one thing he cannot run from.

Graham needs a new wife, if only for the sake of his daughter.

DISILLUSIONED WITH LOVE , Rosabel only wishes to not remain a burden to her uncle’s family much longer. After seeing her parents’ love turn against them, Rosabel dreams of an independent life as a governess.

But then a stranger asks for her hand in marriage, and to her utter shock her uncle instantly agrees.

Will Rosabel find love after all? Or will the memory of Graham’s late wife keep him from finding happiness?

It’s been a while since I’ve read Historical romance and I’m so glad to have read this book. It makes me miss my very early reading days when all I’ve ever devoured were romance books where dukes and duchesses were being highlighted as characters. I enjoyed most parts of Forgotten & Remembered: The Duke’s Late Wife. It has a very original and emotionally-driven storyline that absolutely pulled my heartstrings!

This story is set in the 18th century in England and it talks about Graham Astor, Duke of Kensington, who became devastated when his wife Leonora died, leaving him and their little daughter Georgina behind. He could not find it in his heart to move on and fall in love with any other woman because his love for Leonora was deep. When he met Rosabel at a party a year later, he saw her as a ‘potential’ to become a good mother to Georgina, which forced him to propose a marriage to her despite the fact that it wasn’t because of love. Rosabel, a young and beautiful woman with a kind heart, has always been a woman who follows her uncle’s orders without a question that’s why when her uncle told her to accept the Duke’s proposal, she willingly accepted it, not knowing for sure what life awaited her once she become the Duchess of Kensington.

The book started out so good it basically drew me in. There was something about the author’s writing style that captivated me. Perhaps it’s the vibrancy of her words and the wonderfully described settings and characters that made me immediately embrace it. I loved how Graham was described as someone grumpy and a man of very few words as well as of how Rosabel came out to be a shy and a soft-hearted woman who has a way with kids. I also loved that the story remarkably ran in a good pacing.

However, I wished Rosabel’s character was well-developed here. All throughout the story, I found her lacking when it comes to confidence. She was always so insecure and unsure of herself, always being bothered by how Leonora had been a good wife, a mother, and a duchess. There were also some scenes here that were kind of redundant.

As for the romance, it was developed naturally. The main characters did not fall in love instantly which was so good! I loved how Graham and Rosabel’s attraction towards each other slowly grew and how Graham wasn’t able to discover Rosabel’s inner and outer beauty right away.

“Because the moment he laid eyes on her, he knew her to be the one woman who could make his life complete.”

The side characters were all amazing and with unique traits, especially Edmond Dunsworth (Graham’s brother-in-law), Helen (Leonora’s mother), and Georgina. There were scenes shared by Rosabel and Georgina that made me teary-eyed because they were just simply touching and adorable.

The ending left a wonderful feeling to my heart. It was sweet! It also brought a promising story for Edmond. I’m looking forward to reading his story in the future, as well! Overall, it’s a wonderfully written historical romance book. If you love this genre like I do, then I recommend you to check out this book!

(A copy of this book was provided by the author, Bree Wolf, in exchange for a honest review.)