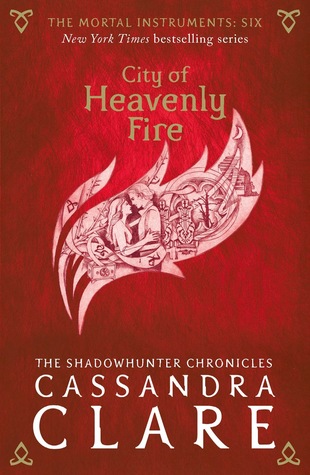 In this dazzling and long-awaited conclusion to the acclaimed Mortal Instruments series, Clary and her friends fight the greatest evil they have ever faced: Clary’s own brother.

Sebastian Morgenstern is on the move, systematically turning Shadowhunter against Shadowhunter. Bearing the Infernal Cup, he transforms Shadowhunters into creatures out of nightmare, tearing apart families and lovers as the ranks of his Endarkened army swell.

The embattled Shadowhunters withdraw to Idris – but not even the famed demon towers of Alicante can keep Sebastian at bay. And with the Nephilim trapped in Idris, who will guard the world against demons?

When one of the greatest betrayals the Nephilim have ever known is revealed, Clary, Jace, Isabelle, Simon, and Alec must flee – even if their journey takes them deep into the demon realms, where no Shadowhunter has set foot before, and from which no human being has ever returned…

Love will be sacrificed and lives lost in the terrible battle for the fate of the word in the thrilling final installment of the classic urban fantasy series The Mortal Instruments!

“We are all the pieces of what we remember. We hold in ourselves the hopes and fears of those who loves us. As long as there is love and memory, there is no true loss.”

This is going to be a very emotional review fangirling so please bear with me….

I knew the conclusion of The Mortal Instruments will be beautiful. What I didn’t expect was how it’s even better than what I’ve expected. It was epic. The best of all the best. The kind of book that was well-molded from start to finish, closing the entire series with a huge impact to the heart.

To Cassandra Clare, you have no idea how much I cried after finishing this book. With your brilliant writing and exceptional imagination, you simply hooked me. I loved how you created your characters and the Shadowhunter world. The way you designed this fictional world with so much love was so overwhelming. And no matter how dark it was, still, its overall greatness was worthy enough. I could read this series all over again!

“If people have a spark in them, yours is the brightest I know.”

City of Heavenly Fire Cassandra Clare is the longest sequel in this series. All the while, I thought City of Glass was the best book, but in my opinion, City of Heavenly Fire was everything. It was simply satisfying. I loved the carefully constructed plot as well as the series of twist and turns.

“The wishes of our hearts are weapons that can be used against us.”

Some of my favorite scenes in this book:

> The real Brother Zachariah – If you have read this book and the TID series, then you will know what I mean. The feels!

> Bat and Rufus’ fight and Rufus’ and Maia’s battle – Talk about a phenomenal battle of werewolves! This scene is not to be missed!

> The drunk Simon moment – This was the scene where I did laugh like a mad woman. Those funny and corny yet super swoony things that he said to Izzy were my undoing!

> Jace and Clary when they were at the cave of Edom – THIS. I’ve waited for this moment. NUFF SAID.

I’ll stop now. I couldn’t go on anymore without spoiling everyone but let me just tell you that there were so many amazing scenes in this book!

Now let me express my feelings and opinions toward the beautiful major characters that made up the whole series.

Jace – He was phenomenal here and his character development was also remarkable. I think it’s about time to see a Jace that truly accepts and embraces his own self and not just his demons. Also, he was way sweeter here. This is the guy that I was looking for in previous books and because of that, I couldn’t be any happier.

Simon – Of all the characters, Simon is my most favorite. He just couldn’t stop being awesome! And what happened to him in the final chapters of this book… ugh, it made me feel emotional!

Alec – I didn’t quite appreciate his character until now. He was way better here! And not just because of his epic action stunts but because in this book, he loved Magnus so fiercely and unselfishly. Like the rest of the characters, he will be hard to forget!

Isabelle – Always such a sexy badass character and I couldn’t stop admiring her! I have always been a fan of her character since City of Bones. In this book, she became even stronger. And she was always a true friend and a sister.

Magnus – This man. This powerful warlock. He’s the reason why this entire series kept getting interesting. Life would be dull and boring without him, to be honest.

Maia – Who would’ve thought that this girl will impress me? She simply rocks! She has this hidden fire in her that was unleashed in this book. So surprising!

“Weapons, when they break and are mended, can be stronger at the mended places. Perhaps hearts are the same.”

To say I was amazed by this series’ conclusion is an understatement. I was left completely awed and emotional and even starting to miss the characters. 😦 The good thing is that there’s Lady Midnight waiting which I will be reading soon! If you haven’t started this series and The Infernal Devices yet, what better time? They’re ultimate favorites of mine!

“We Shadowhunters, we put ourselves in danger, every hour, every day. I think sometimes we are restless with our hearts the way we are with our lives. When we give them away, we give every piece. And if we do not get what we so desperately need, how do we live?”

4 thoughts on “Review: City of Heavenly Fire by Cassandra Clare”