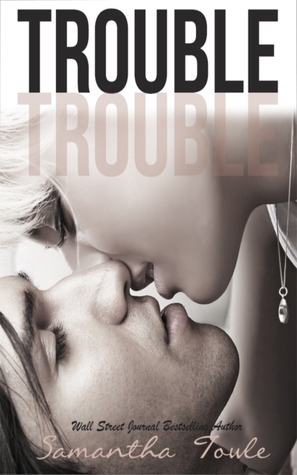 Then he meets Mia.

She’s damaged, troubled and has more baggage than any person can carry. But the more Jordan gets to know Mia-for the first time in his life-he finds himself wanting to try hard for something … for someone … for her.

And then life isn’t so easy anymore.

Jordan is everything Mia shouldn’t want. A whole bunch of dirty hotness, tattooed, cocky bad boy, who made his money at poker tables and picked his women up in bars. Yet, Mia finds herself falling for him. Then the past Mia was running from, quickly starts to catch up with her. Because that’s the problem with running … you have to stop sometime.

And when you stop, you get caught.

This book was indeed trouble.

The book introduces us to the heroine Mia Monroe, a victim of physical abuse from her dead father and her boyfriend. When she decided to finally fight back and leave her boyfriend and the abusive relationship, she went into a secluded hotel where she met the son of the owner, the playboy tattooed guy Jordan Matthews.

At first I really thought I will like it. The introduction seemed intriguing since it depicted a dark, twisted drama about abuse. In the first few chapters, I found myself thoroughly engaged because of author’s writing. But when I reached the male’s POV, I became very frustrated.

Jordan Matthews is an a-hole. I had a problem with his attitude and the way he regards women like they’re a piece of trash. I get that the author is trying to give us a clichéd manwhore hero who breaks hearts and vaginas, but this guy got into my nerves! He was so full of himself and just totally a jerk.

So he redeemed himself in the later parts of the book because he fell in love with Mia and he wanted to comfort her and be the man who is right for her. But it’s too unbelievable.

You see, I can’t find myself swooning over a guy who managed to give a bad impression to me. Another thing that bothered me was how the story went slowly spiraling downhill after Chapter 3. Mia and Jordan’s interactions were lame. I no longer care about them from there, to be honest.

I think the only positive thing that I found here was the character development of Mia in the end where she embraced the possibilities of her new life and became a tough and wiser woman.

“Sometimes that’s all it takes. Just one person to turn everything on its head. Remind you of the person you were.”

As a whole, I didn’t enjoy this book. At first it was promising but it just didn’t work out for me in the end. 😦