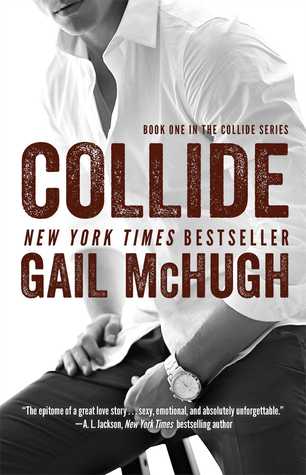 Colliding with a second chance…..

On the heels of graduating college and trying to cope with her mother’s death, Emily Cooper moves to New York City for a fresh start.

While harboring secrets of his own, Dillon Parker takes care of Emily through her grief. Knowing he can’t live without her by his side, he’s sweet, thoughtful, and everything Emily has ever wanted in a man.

Until she meets Gavin Blake-a rich and notorious playboy who is dangerously sexy and charming as hell. Emily tries to deny the instant connection she feels, but Mr. Tall, Dark, and Handsome is not inclined to let go so easily. Recovering from his own painful past, Gavin will stop at nothing to win Emily over.

This unexpected encounter compels Emily to question her decisions, forcing her to make a choice that will destroy friendships, shatter hearts, and forever change her life.

“When you want something this badly, you don’t just give up. You fight and fight until you absolutely can’t fight anymore.”

You know it’s a good book when it takes you into this roller coaster ride of emotions. I swear this book brought on many feels! Normally I don’t appreciate books that have something to do with complicated love triangles, but this one seemed to be an exception.

Collide, the first book of Collide series, started when Emily Coooper moved to New York to attain a career and to move on from what happened to her mom. She’s a country girl but with the help of her boyfriend Dillon, she was able to adjust to the city life. While working part-time at an Italian restaurant, she met the rich and dangerously hot guy Gavin Blake. There was a sudden spark between them, a connection that they weren’t able to resist. But she’s in a relationship with Dillon, so it shouldn’t be possible for her to get attracted to Gavin.

What struck me while reading this book was the huge amount angst in it. Talk about an anxiety-inducing love story. I don’t usually condone this kind of story because it isn’t fair for a girl to be extremely attracted to another man while she’s in a relationship with someone, but heck, her boyfriend Dillon is a total jerk! A pretensions, big liar. All throughout the book, I was really rooting for Emily and Gavin to be together and hoped that she will immediately break up with Dillon.

“Sometimes bad choices bring us to the right people.”

I admit I was so frustrated with Emily most of the time because of her stupid, very stupid decisions! I swear she did it countless times and it was getting on my nerves! I guess she’s the only reason why I can’t bring myself to rate it 5 stars.

But Gavin Blake… He’s the perfect thing that happened in this book. I loved his character so much it hurts. I wish all heroes are like him. Tell you what, he already owned all the best attributes in a book boyfriend.

The romance in this book was so damn good, I couldn’t ask for more. So much sexual tension and frustration all around. As a whole, I enjoyed it. It hooked me from the very first chapter up to the last. It’s my first Gail McHugh read and I loved her writing style and the way she rendered such a story with so much conflicts. Definitely going to read the second book!

“I want the good, the bad, and the in-between. All of it is what’s going to make us amazing together.”