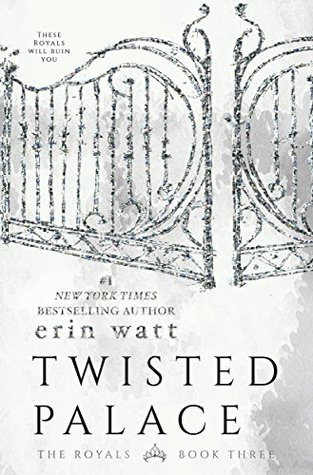 Twisted Palace was an awesome conclusion to the Royals trilogy. Readers are in for an absolute treat. I eagerly await the next book from Erin Watt. —New York Times Bestselling Author Samantha Towle

“Erin Watt’s words are addictive brilliance. If you haven’t let these Royals ruin you yet, what are you waiting for?”—USA Today Bestselling Author Meghan March

From mortal enemies to unexpected allies, two teenagers try to protect everything that matters most.

Ella Harper has met every challenge that life has thrown her way. She’s tough, resilient, and willing to do whatever it takes to defend the people she loves, but the challenge of a long-lost father and a boyfriend whose life is on the line might be too much for even Ella to overcome.

Reed Royal has a quick temper and even faster fists. But his tendency to meet every obstacle with violence has finally caught up with him. If he wants to save himself and the girl he loves, he’ll need to rise above his tortured past and tarnished reputation.

No one believes Ella can survive the Royals. Everyone is sure Reed will destroy them all.

They may be right.

With everything and everyone conspiring to keep them apart, Ella and Reed must find a way to beat the law, save their families, and unravel all the secrets in their Twisted Palace.

“… All these things are part of what twisted us up inside, but somehow those tangled strands fused until we were whole again.”

(I buddyread this book with my fabulous sis Bea.)

Talk about one of the most overwhelming twists of the year. Twisted Palace practically made me sit on the edge of my seat. And I never got to sit back.

I admit I didn’t quite trust this book to stun me the way the previous books of the series did to me. Seeing mixed reviews did that. But after finishing it, I could say Elle Kennedy and Jen Frederick did not fail. The conclusion of this series is truly amazeballs!

After a set of cliffhangers in Paper Princess and Broken Prince, we finally get to have a satisfying ending. And we get to have the ultimate answer to the million dollar question: Who killed this character???

Twisted Place may have a slow-building plot but it surely brought me on a roller coaster ride because of its good amount of mystery. As I was reading it, I found myself collecting clues and piecing together some explanations but no sooner than I have formed an answer in my mind was it immediately taken away in the most insane twist. THAT TWIST, everyone, was the twist that I was looking for… and was thankfully given. I swear that revelation was something that I did not see coming.

There are things that stood out in this book including Reed and Ella’s romantic and character development. The spark that these characters ignited was so bright, almost blinding. And I loved it. They have been through the rough patches and the bumps in the road but still, they both ended up so strong and solid together. I really bought the affection they felt for each other.

I loved that Ella remained tough in her decisions and was basically there for Reed in times of difficulties. Her undying presence and love for the Royal boy and the whole Royal household really worked out so well. And Reed… OMG. This guy. He was nicely fleshed-out. It’s such a wonder seeing him grow from a mean character to a kind and dependable one. In this book we finally see a different Reed, one who can definitely control his anger issues.

Let’s face it. Series-enders with a combination of fluffy and dark themes like The Royals is a risk, and a lot of series have failed when it comes to satisfying the readers with a great conclusion, but I am happy to say that the authors in this series were able to give it to us. At no point did the overall intensity of the book feel forced.

There may be some unnecessary dramas here and there (which kind of pissed me off at first) but soon I realized that they are necessary spices. They were actually the things that brought steam in this finale. And even though I was expecting more action, I still found myself getting thrilled and nervous because I knew that anytime a bomb will drop.

All in all, I was satisfied with the series’ ending and right now I’m having this separation anxiety because well… the series already ended. It’s sad to say goodbye to Ella Harper and the Royal Boys and everyone that complete this series. Twisted Palace was brought out in an epic way and the series, as a whole, was one of the best series I’ve ever had the privilege of reading. I will definitely recommend it to the fans of this genre. 🙂