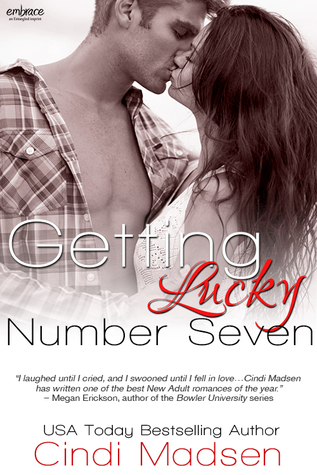 Lyla Wilder is done being the shy, chemistry nerd extraordinaire. While every other college student is out having fun, Lyla is studying. With her cat. Well, she’s played it “safe” quite enough, thank you. So she creates a “College Bucket List”―with item #7 being a night of uninhibited, mind-blowing sex…

But she needs some help from her man-whore best friend.

Hockey player Beck Davenport thought Lyla’s transformation would be subtle. Man, was he wrong. With every item she ticks off, Beck finds himself growing seriously hot for his sweet, brainiac best friend. And if he’s not careful, he’ll end up risking their friendship in order to convince Lyla that he might just be her lucky #7…

I am not against books with cliché themes and storylines as long as they’re well-delivered and written in an alluring way, but this book just didn’t do it. The best friends turned lovers and friends with benefits tropes weren’t done in a way that made me swoon or fall in love with the characters.

Getting Lucky Number Seven follows the characters Lyla Wilder and Beck Davemport, both chemistry students of the same university and class. Their friendship started when they became lab partners. Even if they’re completely different when it comes to their school statuses (Beck being a popular ice hockey star and Lyla as a weird and geeky student), their friendship clicked. But when Lyla realized one day that she needs to change herself completely and transform into a typical party college girl, she asked Beck to help her. She wrote a “College Bucket List” and one of them is to get laid which is the #7 on the list. Their friendship soon turned into something else when Beck suggested that he will be the one to fulfill the #7.

I have to say that I was particularly less of a fan of Lyla. I thought she was trying real hard to fit in a group and was overdoing things. Even if she’s doing it to improve herself, I hate to say that it just ruins her academics. And oh my, don’t even get me started on the way she constantly bites her lips (like she’s doing it all the time!) which kind of annoys me.

However, I liked Beck. I connected with his character. He’s an amazing and sweet person. Not to mention that he cares deeply about her little sister.

As much as I loved the writing which was really good, the absence of chemistry and the forced connection between the characters ruined its promising appeal to me. I’ll still read the sequel of this book because I found Whitney’s love story interesting. 🙂

2 thoughts on “Review: Getting Lucky Number Seven by Cindi Madsen”