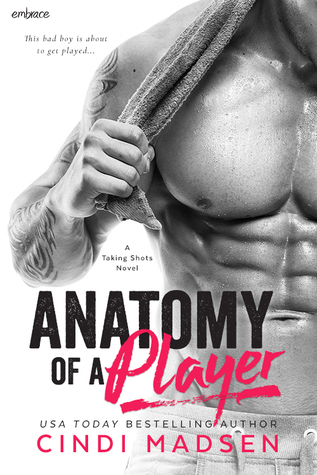 This bad boy is about to get played…

After getting her heart broken by a player again, Whitney Porter is done with men. She’s focusing on her future career and her first assignment at the college newspaper: Posing as a sports writer for an exposé on the extra perks jocks receive. But Hudson Decker, the bad boy of the hockey team, is about to test her resolve. To keep herself from breaking her no-sex rule with the temptingly tattooed athlete, she decides to use him for a side project: Anatomy of a Player, to help Whitney—and women everywhere—spot a player, learn what makes him tick, and how to avoid falling for one.

With his life spiraling out of control, Hudson Decker’s looking for a distraction. When his teammates bet him that he can’t land the gorgeous but prickly new reporter, he accepts the challenge, boasting he’ll have her in bed by the end of the semester. But Whitney is so much more than Hudson expected, and soon enough, he’s in too deep. The last thing he needs is another complication, but staying away isn’t an option. One thing’s for certain: this girl totally throws him off his game.

Anatomy of a Player is much better compared to the first book of the series. However, it took me a while to warm up to the story.

The book follows journalism student Whitney Porter and ice hockey player Hudson Decker. After getting Whitney’s heart broken by her cheating ex, she swore to never fall in love again with guys– most especially athletes. When she met hockey star Hudson though, her plans to avoid athletes failed. It’s difficult to resist a sexy, tatted, and packed-with-abs guy who knows how to treat her right. When she knew she’s about to fall for him, that’s the time when conflict began. Dating him is not an option because she’s also secretly working for an article that may destroy Hudson’s hockey life.

The writing once again especially awed me. It was good! There was also an angst here which made me like it. However, Whitney turned me off. She was weak for a character. And she didn’t fail to annoy me most of the time. For once, she was so full of drama and the way she treated Hudson at the first few chapters was immature.

While I loved that there were also conflicts, I found the story packed with too many issues and problems and that’s just so frustrating.

1. Hudson has mommy issues.
2. Hudson is having academic problems.
3. Hudson has a bet with his teammates that he can get Whitney to sleep with him.
4. Whitney has relationship issues.
5. Whitney is secretly writing an article that may hurt Hudson.

Yep, too many issues.

As a whole, The Anatomy of a Player was just okay. It could have been a lovable NA romance book if there weren’t too many issues that ruined my enjoyment.