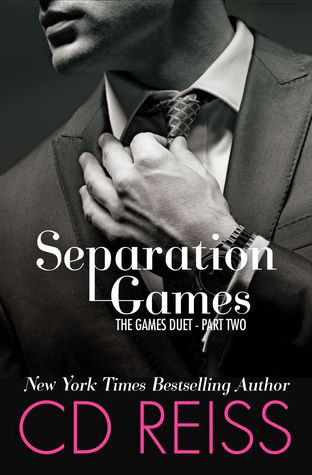 The stunning conclusion to the New York Times Bestseller.

These are the unbreakable rules in the game.
Stay collected. Compartmentalize. Think your next move through. Never let your heart dictate your tactics.

The heart is impulsive.
The heart makes bad decisions.
The heart doesn’t see the long game.

Because the heart may have decided to get Adam back, but when the endgame comes, the heart’s going to be the first thing to break.

“He’d asked me to love him when what awakened my love was the very thing that killed his love.”

I was honestly not 100% impressed with this finale. It’s not that the book wasn’t good. I actually fell in love again with the writing of C.D. Reiss. I just thought it lacked some things while it overdid some unnecessary things at the same time. I extremely loved the first book of this duet Marriage Games so I really expected the final book to be that powerful and passionate like the first book.

Separation Games picks up where Marriage Games left off. After Adam discontinued his 30-day deal with Diana to save their marriage, Diana was devastated because it was then when she finally realized that she wanted to be a submissive for Adam. But Adam has some issues with his life as a Dom and he realized that he could never love Diana as a submissive. Now, Diana is determined to get Adam back and pursue the dark world of submission. She is going to do everything in her power to win him back.

First of all, Diana was such a total mess in this book. I didn’t like the way she approached things. Not to mention the fact that she was so inconsistent. One day she was all over Adam and she was really desperate to win him back and then the next day when Adam finally wanted her, she said “NO. NO. NO.” I mean girl, get your act together!

There were just too many scenes here that served as fillers. I wanted some depth in the story. Some intensity like the first book. Despite the flaws, however, the conclusion was great and I was glad how everything turned out good in the end. I was shocked by that little twist with Serena there. Lol.