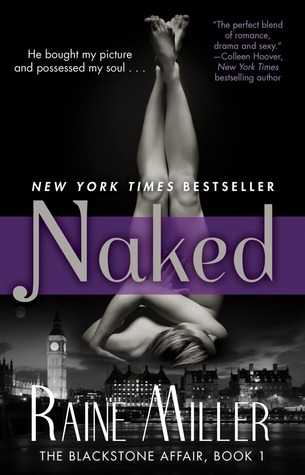 The first book in the bestselling Blackstone Affair trilogy!

Brynne Bennett has left scandal in her past and is living the good life. An American grad student at the University of London and part-time photographic model, she’s getting back on track with lots of hard work and focus on a career in art conservation. When successful and charismatic London businessman Ethan Blackstone buys her nude portrait, he wants to possess more than just her image. He wants Brynne in his bed, serving him in every way possible. He has no trouble voicing his desires, and he isn’t taking “no” for an answer.

At first, his dominant nature captivates her, but it isn’t clear if the force of his powerful desire will ultimately awaken or dispel the demons Brynne is carrying inside. There are secrets on both sides of this relationship—huge ones. Can Ethan erase the scars of Brynne’s past so that she can reveal her true self to him? Or will the shadows cast by Ethan’s own mysterious former life destroy their chance at happiness?

Naked is the sizzling, unforgettable story of what happens when a strong woman meets the one man powerful enough to strip away all her defenses, leaving her standing naked and perfect before him.

Unfortunately, this one didn’t work out. This book and the series have been on my radar ever since I heard a lot of good things about them. I was so excited last week because finally, I was able to dive into it. Okaaay so it started off well enough. The heroine Brynne Bennett was sure to be an interesting character– an American who moved to London to study as a grad student and work at the same time as a part-time photographic model. This actually reminds me of the book that I liked, On Dublin Street.

Our hero, the alluring Ethan James Blacktone was one of those typical rich, Alpha males that you couldn’t resist. I loved how his character was portrayed here as he reminds me of so many heroes that captured my heart. However, I didn’t like the way his physical traits were described. Yes, he’s handsome and all kinds of hot, but I swear I didn’t like his goatee. Hahaha! I don’t intend to offend anyone who has a goatee, but when it concerns Ethan’s character, I just pictured him to have clean facial features. That’s how I like it.

Moving on, I didn’t like how generic their love story was. I was looking for some factors that would make this book a lot different, something to set it apart from the usual tropes I’ve read about Alpha males falling in love with a vulnerable, beautiful woman. Yes, the sexual tension that both characters developed right at the start was thick and palpable, yet I felt like it simmered so quickly that I didn’t really find myself be affected.

The romantic scenes were sure to be steamy, but they weren’t as emotionally charged as I’ve expected. What I just liked about this book was the pacing which was fast and steady. There weren’t unnecessary dramas too, which made me feel grateful at least. But if I’ll be asked if this is the kind of romance book that would absolutely disarm me, sad to say, no. I am not closing my doors for this author and her future works, though. Her writing was good. Amazing even. And I really want to try her other books.

“You are my ray of light in a fog of ignorance and frustration.”