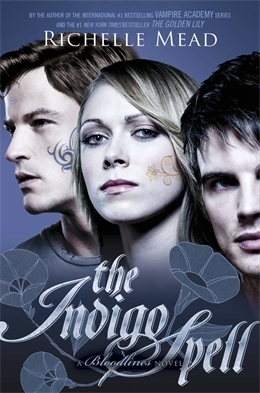 An ancient magic.
A heart-wrenching decision…

Sydney Sage is an Alchemist. She protects vampire secrets – and human lives.

In the aftermath of a forbidden moment that rocked Sydney to her core, she is struggling to decide between following her Alchemist teachings – or her heart.

Then she meets alluring, rebellious Marcus Finch, a former Alchemist who is now on the run. As Marcus pushes her to rebel, Sydney finds that breaking free is harder than she thought.

There is an old and mysterious magic rooted deeply within her. And as Sydney searches for the person attacking powerful young witches, she realizes that she must embrace her magical blood – or else she will be next.

I’ve read this gem together with sis Bea. You can read her beautiful review here. 🙂

The Indigo Spell has put a spell on me! Once again, Richelle Mead captivated me with yet another amazing Bloodlines sequel.

This book was overloaded with so many happenings that are very significant and important. In this sequel, Sydney Sagedelved into more dangerous situations– discovering her magical abilities and even finding out the conspiracies hidden by The Alchemists. Adrian was there for her all the time, supporting her and looking after her in every perilous occurrences.

Sydney’s character became incredible here, though I must say I have mixed feelings with her. She was at times, very stubborn and too reluctant to give in to her heart’s desire which is to return Adrian’s feelings. Nevertheless, I admire her bravery and her usual critical-thinking that can always make the situations bearable and manageable. Adrian’s character was also great. He became more passionate and swoony and a total bae!

The romance in this book was beyond amazing. I mean, who couldn’t resist the romantic scenes between Sydney and Adrian? Those scenes absolutely outdid the ones in the previous books. I couldn’t stop myself shipping them because it’s hard not to. They’re too perfect! *sigh And their chemistry!

I guess what I truly love about this sequel, apart from the great romantic development, was the action scenes. Totally amazeballs! Those scenes, especially the one where they were running away from the evil witch, were EPIC! Simply adrenaline-pulling that I found myself truly thrilled.

At some point, I found some dragging parts but the remaining chapters saved everything. I was about to rate it 4 stars but Chapters 24 and 25 were a game changer and it’s hard to resist it when you’re fangirling over everything– especially when it has something to do with SYDRIAN.

Overall, a great sequel! Hands down! The series gets better and more thrilling and I can’t wait to find out what will happen in The Fiery Heart. 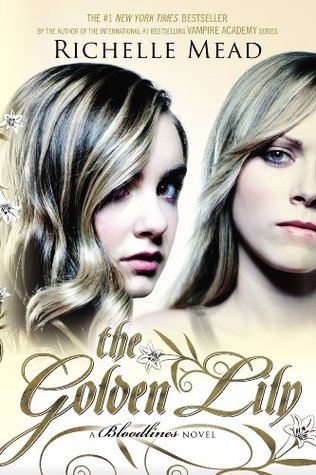 Sydney Sage is an Alchemist, one of a group of humans who dabble in magic and serve to bridge the worlds of humans and vampires. Alchemists protect vampire secrets – and human lives.

Sydney would love to go to college, but instead, she’s been sent into hiding at a posh boarding school in Palm Springs, California – tasked with protecting Moroi princess Jill Dragomir from assassins who want to throw the Moroi court into civil war. Formorly in disgrace, Sydney is now praised for her loyalty and obedience, and held up as the model of an exemplary Alchemist.

But the closer she grows to Jill, Eddie, and especially Adrian, the more she finds herself questioning her age-old Alchemist beliefs, her idea of family, and her sense of what it means to truly belong. Her world becomes even more complicated when magical experiments show Sydney may hold the key to prevent becoming Strigoi – the fiercest vampires, the ones who don’t die. But it’s her fear of being just that – special, magical, powerful – that scares her more than anything. Equally daunting is her new romance with Braydon, a cute, brainy guy who seems to be her match in every way. Yet, as perfect as he seems, Sydney finds herself being drawn to someone else – someone forbidden to her.

When a shocking secret threatens to tear the vampire world apart, Sydney’s loyalties are suddenly tested more than ever before. She wonders how she’s supposed to strike a balance between the principles and dogmas she’s been taught, and what her instincts are now telling her.

Should she trust the Alchemists – or her heart?

Another successful buddyread with my sis Bea. You’ll see her beautiful review when you click her name. 🙂

One word to fully describe the awesomeness of this book: ADRIAN.

Holy craaap! This boy is one of the best, swoon-worthy fictional guys and it’s so unfair we could not see him in the flesh!

After reading this book, I was left utterly speechless and blown away. It was way too good! Most sequels in a series tend to give me some doubts with their potentials because oftentimes an author changes his or her tune and the end product sometimes disappoints me. But in this sweet, sweet sequel, I put all my faith and 100% belief that it will turn out good and I was right. It was one of the most amazing installments in a series. Because Richelle Mead apparently does not disappoint.

I loved how The Golden Lily lived up to the interesting plot and romance that made the first book Bloodlines an enjoyable read. In this book, Sydney Sage and Adrian Ivashkov‘s character was greatly developed as they continued to hide under the radar of the enemies of St. Vladimir Academy. There were lots of things that happened here and new characters were introduced, too.

I wasn’t disappointed with the way things had panned out in this book. The plotline was so good and the pacing was fast. No dull moments as well. It was also nice to see the (non-insta-love) romantic development between Sydney and Adrian. Their romance, in a way, was slow-burning and tension-fueled and I totally loved it!

What also basically got me hooked was how likable the characters were. Sydney is a female lead that I will love to befriend in real life because she is so smart, determined, and mature. I loved how she has this positive attitude that everything can be done– no matter how difficult that thing is. She especially encourages and inspires Adrian to be the best that he can be, and that is something. Adrian is also one great male lead. Since Vampire Academy, this guy already took my breath away because of his humor and romantic gestures. He didn’t change in this series. In fact, his character became even better!

I also loved the humor and the witty exchange of dialogues here. When you pair Sydney and Adrian together, everything collides so perfectly!!!

Apart from that, Richelle Mead also made this book even more interesting because of the side characters like Eddie, Jill,Angeline, Sonya, Trey, Dimitri, etc. The value of friendship and family love was so touching!

These are my favorite lines from Adrian that basically knocked me off my feet:

“I tried to be a better person for her (Rose)– but it was to impress her, to get her to want me. But when I’m around you, I want to be better because… well, because it feels right. Because I want to. You make me want to become something greater than myself. I want to excel. You inspire me in every act, every word, every glance. I look at you, and you’re like… like light made into flesh. You have no clue how beautiful you are or how brightly you shine.”

All in all, I had a great time with The Golden Lily. After reading it, all I wanted to do was read the next book which is The Indigo Spell. 🙂 It was just everything I wanted in a sequel!