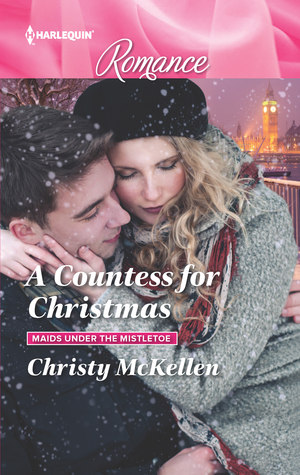 Emma Carmichael is shocked when she sees who she’s waitressing for at a lavish party—Jack Westwood, the new Earl of Redminster. Her new life comes crashing down when Jack announces to the world that they’re married!

Jack has never forgotten his first love despite the tragedy that tore them apart. When the paparazzi cameras intrude, he proposes they live as man and wife until the fuss dies down. Emma feels like Cinderella, masquerading as his countess…only, behind closed doors, their marriage feels tantalizingly real…

Just what I needed this Christmas. The story of A Countess for Christmas is another one of those royal romance books that are all things sweet and are quite simply difficult to resist.

Emma Carmichael has been married to the Earl of Redminster Jack Westwood. However, their marriage was a secret. They were both so young when they made such a sudden decision to settle down and because of an unfortunate event, they were forced to separate but weren’t able to end their marriage. Now six years later, they met again when Emma worked as a waitress at a party and unexpectedly saw Jack.

I love Christmas romances and so are getting-back-together stories. Add the fact that it’s written by Christy McKellen who has always been writing beautiful Harlequin stories, so this book was definitely a win. Our heroine Emma was likeable. She was not annoying and she made such good decisions all throughout the book. Jack was also a swoon-worthy male lead. Always such a gentleman and passionate when it comes to his feelings to Emma.

I also loved their conversations in this book and the way both characters made me feel connected to them. All in all, this book was a delightful quick read with a wholly satisfying ending. While a little cliché was thrown in some places, this was simply designed to make the reader feel good especially when it’s read on Christmas Day.

MERRY CHRISTMAS AND A HAPPY NEW YEAR, EVERYONE!

Thank you to Christy McKellen for sending me a copy of this book in exchange for a fair and honest review.

2 thoughts on “Review: A Countess for Christmas by Christy McKellen”